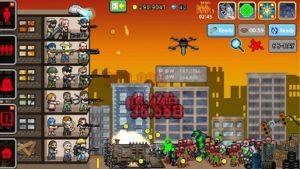 PREUS, well-known for 100 DAYS – Zombie Survival has just published another game called Zombie Invasion. The original version of the series has surpassed over 5 million downloads on Google Play Store with a decent rating. If you have not played that game, then here’s the overview – your goal would be surviving. Zombies invade your land – they spawn in endless numbers, but come in waves. You will progress by defeating those endless waves of enemies.

100 Days – Zombie Invasion Is Now Out

It’s not different from their original release. You will be facing huge waves of deadly zombies and bosses. This one has two game modes; normal and survival. In the normal mode, you will progress day-by-day. On each day, you face deadly waves of walking zombies. And, when the night gets darker, they will come in huge. To progress to the next day, the player will need to defeat the boss.

Unlike the normal deadly waves of zombies, the boss has powerful HP stats – so you will need more firepower. Boss and zombies attack your shelter; protected by defensive barricades. If they manage to break down it, you will die!

The player can hire teammates – each character in the game uses the different weapons. Each weapon has a unqiue attack style. You can get powerful by doing character upgrades, teammates upgrades. Or by tapping the screen, you can increase the fire rate. As you kill zombies, they will drop gold coins, which is the basic currency, that you use in upgrades.

As you reach certain levels or stages in the game, you will get to use the power-ups that ease the survival in the apocalypse. Keep slaying down the zombies, gather inventory items for passive buffs, and survive!

So this would be all in this 100 Days – Zombie Invasion game overview. The graphics are great, the gameplay gets challenging as you progress further. You will love playing it if you are a fan of survival zombie games.