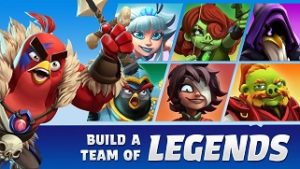 Rovio’s latest Angry Birds game; Angry Birds Legends has just been released for Android on Google Play Store. It’s a turn-based RPG where players will build their team of angry birds characters with unqiue abilities. The app’s size is around 62 MB – after that, it downloads another patch during the initialization. You will need a stable secure internet connection for smooth gameplay.

Angry Birds Legends Is Now Out

Speaking of gameplay and progression, there is nothing new for those who have been playing the turn-based RPGs like Marvel Strike Force, Disney Sorcerer’s Arena, etc. Like all these games, here, you will progress through the campaign mode – it gives you EXP, in-game currencies to strengthen the characters, and much more. For the campaign mode battles, you can select up to four characters; where one of your characters would be the leader – leader’s skill can be helpful for the teammates.

As per the current version of the game, there are 19 characters to collect. You can summon them with the premium in-game currency and make them powerful by making strengthen upgrades; leveling, star-up, etc. You will need their duplicate shards to sr-up. All these characters have basic abilities and an ultimate ability. And, blah blah blah!

The graphics are OK, the gameplay is as same as other turn-based RPGs.

So this would be all in this post on Angry Birds Legends game overview.