Anime Mania is a top-notch Roblox anime theme-based game by Anime Legend Studios. The game features characters from popular anime series such as Dragon Ball, One Piece, Naruto, and Bleach 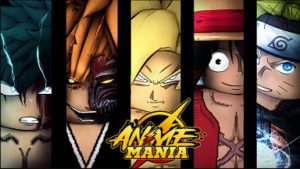 In Anime Mania, players use the gems or gold to get the characters and then use the characters to form a powerful team and battle in different kinds of game modes. Over the past few weeks, devs have released a couple of updates adding new characters of all sorts of grades like mythical, legendary, rare, uncommon, and common.

The battle rules, controls are also pretty simple. All you need to do is form the team by selecting your favorite characters. To win against powerful foes, you can level them up, ascend or evolve, and unleash the true potential. Each character in the game has got unique skills, which are pretty easy to unleash once you get your hands off them.

If you are looking for a new anime game, then do try out this game. It has got really good gameplay, community, and fun and challenging game modes. And don’t forget to check out these Anime Mania codes and its tier list.

Price:
Free
Play this game with friends and other people you invite.
See all your private servers in the Servers tab.