AFK Arena is a popular idle gacha RPG featuring hundreds of heroes. It is available for free to download from Google Play Store and iOS App Store. If you are looking for games like AFK Arena – featuring the same mechanics, then you are on the right page. In today’s post, we have listed the best games like AFK Arena featuring a similar system; idle gameplay, gacha system, RPG, etc. So let’s not waste any time and head to the main content.

I Am Hero – AFK Tactical Teamfight 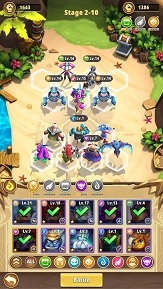 This game is in open beta. The UI is pretty nice. It plays in portrait mode just like AFK Arena – and, features so many heroes to collect. Game modes include campaign, dungeon, tower-mode, arena, and tournament. The graphics are of top-notch quality.

Idle Arena is a new Idle Gacha RPG by FredBear Games Ltd. In this game, you will build and power up the squad of different-tier heroes and fight the enemies in a wide range of game modes; starting with the PvE chapter mode to PvP Arena. Like the AFK Arena game, Idle Arena features the gacha system, idle gameplay, lots of collectible heroes, and other functions. If you are looking for games like AFK Arena, then the Idle Arena game would be a great choice.

AFK Cats game is another alternative game to AFK Arena. In the game, cats are the main characters that you use to build up the squad to smash down the enemies in PvE and PvP Arena challenges. The PvE features thousands of battle stages with increasing difficulty and boss battles. The graphics of the game are great and it also has a similar system; gacha, idle, collectible cats, etc. This would be another option.

Idle Heroes is the most popular Idle RPG for Android/iPhone. Published by DHGAMES, the app has accumulated over 10 million downloads on Google Play Store and listed in the top games in the US App Store. There are over 200 heroes to collect, challenging stages to complete, a wide range of game modes; guild wars, PvP, Tower, etc.

TapTap Heroes is another one of the best games like AFK Arena – featuring over 200 characters to collect, idle system, lots of game modes. Also, it has portrait mode gameplay like AFK Arena. The graphics and animations are pretty great. You will love it if you like the Idle RPGs.

Idle Legend is another one of the best games like AFK Arena. Unlike other games listed here, it follows the auto-chess battle gameplay where you put the heroes on board and fight the enemies. There is an idle system, tower mode, PvP Arena, guild mode. And, it features over 60 collectible heroes that you summon using the gacha function. The 3D graphics are amazing. Battles are also challenging – there are different types of heroes with unique abilities. You are gonna use them wisely and win the matches.

As of now, this game is in open beta. It plays like AFK Arena. You will set up a squad of heroes who continue to fight while you are away. You will progress through the campaign mode where you complete the stages and grind currency. There are lots of heroes to collect; legendary, elite. New game modes will unlock as you complete certain stages in the campaign mode. For example; Endless Abyss, Ruins Adventure, Island Defense.

So these are the best games like AFK Arena for Android/iPhone. If you know more, comment below. We would take a look into those games and add them to this list if they meet the following criteria: –