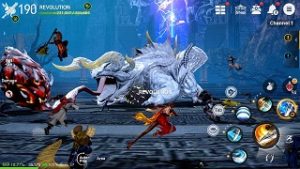 Netmarble’s latest MMORPG Blade & Soul Revolution recently got released on Google Play Store and iOS App Store. The game claims to be the ultimate MMORPG, which it’s not – why? Well, we will talk about that later in this review. We have been playing it for a while now and going to share an honest review with all of you. It’s worth reading if you are thinking to invest your time in this game. So, let’s get started!

Blade & Soul Revolution features the standard mobile MMORPG mechanics where you start by choosing the class. The current version of the game offers multiple classes classified into different races. These classes are Kung Fu Master, Blade Master, Destroyer, and Force Master. As a newbie, you will get two character slots so that you can create two characters on one server. You can buy the character slots later in the game’s shop – it will cost you the premium asset. It will let you customize the character; there are lots of appearance or customizations available at the start of the game. If you want to change it later, you will have to buy an appearance change ticket – that would cost x1K crystals.

From our perspective, Blade & Soul Revolution does offer great perks to the players who spend real money. Players can buy the crystals with real money and spend on Equipment gacha, Pet gacha. From the equipment gacha, you might get the legendary or heroic tier equipment, which is hard to craft as a f2p player. The Pet gacha offers heroic pets, superior pets that are hard to get as a f2p player.

Other than that, you can spend the real money directly to purchase the premium bundles featuring the exclusive items that would give you a tremendous amount of perks and items that you can use to progress faster or develop character. For example – the must-have starter bundle pack features the items that give you more silver, EXP, and increases items drop rate. Also, you can buy high-quality equipment directly from the shop by spending real money – no gacha.

In our evaluation, we found that Blade & Soul Revolution is typically a freemium game that you can play for free but the progression would be slow – those who spend money can get the best things quickly without playing the game. You will have to find the materials, grind the silver, invest your time so that you can have better gears to equip to the character for fighting giant monsters.

Blade & Soul Revolution gameplay is mostly auto – although, you can disable the auto-battle mode and play manually. In some of the fights, you will have to disable it for sure as the AI does not help you all the time. You will have to dodge the enemy attacks and use the character’s skills wisely.

You will start by doing the main quests where you interact with the NPCs, claim the quests, and earn the EXP, currency, items to use in character building. As the level goes up, plenty of game modes get available to play; contribution, dungeons, daily quests, clan quests, etc.

It has a crafting system, which is pretty good. You get to craft all sorts of things such as the equipment, potions, outfits, etc. For crafting, you will fight the monsters as they drop the items when you kill them. The map is huge and features lots of locations with different types of monsters and items drop rate.

Like all other games, it’s easy in the beginning. As you proceed through the acts/chapters or quests, you will need to increase the attack and defense power of the character. You will do it by equipping the gears, soul shields, leveling up, upgrading the skills, and there are plenty of more ways.

The gameplay is OK; not so bad, not so great. If you want to enjoy, play manually. For AFK, use auto-battle mode. The graphics and visuals are decent; the cutscenes in the story-line are awesome. Speaking of content, you have lots of game modes to play; dungeon, PvP Arena, Clan Dungeon, etc. Other than that, you can focus on the chapters/acts, daily missions, side-missions, and grind on the map by defeating monsters.

Blade & Soul Revolution game features ads – players can watch the ads and get the chests from the shop; equipment chest and the pet chest. It also features IAPs; you can spend real money to buy the premium virtual currency; crystals(for gacha and items in the shop). Also, you can buy bundle/packs with real money; outfits, equipment, pets, etc.

So that’s all for now in this post on Blade & Soul Revolution review. Share your reviews in the comments. If you are new to the game, take a look at this walkthrough guide or best class info.