Get started with these Bullet Echo tips & tricks: cheats, guide & strategies to win matches in all sorts of battle royale modes of Bullet Echo 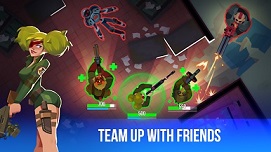 These Bullet Echo tips and tricks packed with game guides for the beginners help you win matches easily and master the game modes and climb up on the ranking leaderboard by unleashing winning streaks. So, let’s not waste any more time and take a look at the Bullet Echo tips & tricks: –

Land Together – Cover Up Tips

In the team-battle modes, you are matched with random players all across the world – the first tip here is to land together so that you can cover up each other in case the enemy squad also spawns there. After selecting the game mode and matching completion, you will see a map on the right side of the screen – with different blocks – make sure that you and your teammate lands together in one block.

Tips To Get Stronger In Bullet Echo

When you land on the map, you are weak. The next thing to do is make the character stronger so that you can crush the enemy or defend yourself from the enemy shots. To get stronger, you need to start looking around – for the armor, ammo, healing items, etc. Armor will give your character a shield that reduces the damage taken. Ammo-related items increase your damage power. With the healing items in Bullet Echo, you will be able to restore a portion of health. All you need to do is tap the (+) healing button on the right side of the game screen.

Be Sneaky In Bullet Echo

During the battle, players can detect the nearby players if they make noise. Sneaky – move slow to make it difficult for enemies to hear you. If you move fast, enemies will be able to track your footprints. Since it’s a battle royale game and the only goal is to survive until last – the number of kills doesn’t matter, it’s better to play defensive and sneaky.

You can use the map objects to cover yourself up – enemies’ shot can not bypass the objects. You can use them as a shield and run away if low on health.

It’s better not to take a fight when low on health.

Always be with the team – it increases the chances of winning as you will be able to tackle the enemies at full strength.

Above all these, make sure to revive the dead allies – stand next to them.

At the top-left corner of the battle screen, you can see the number of players alive on the map. It’s better not to take fights early on and focus on looting armor, ammo, buff items, health kits, etc. Use the joystick on the bottom-left to move the character. Swipe on the right side of the screen to rotate the character; change aim, direction, etc. The character in Bullet Echo game fires when the enemy is in its gun range. Tap the healing button on the top-right to recover health. Tap the reload icon to reload the weapon/gun.

Bullet Echo game’s maps are packed with amazing items that players can pick up and get stronger. Here’s the list of items that you can pick on the map –

Each hero uses a different weapon. Navigate yourself to the hero collection menu and tap on the hero card – on the profile page, on the top-left, you will see the character’s weapon type and strength. For example – Bastion uses a rapid-fire shotgun. Stalker uses a rifle. Raven uses a long-range submachine gun.

Players playing the Bullet Echo game can enhance the heroes’ potential by doing these things; train them using the coins. Once they reach the max level, you will then be able to raise their tier. Also, upgrade the hero abilities using the batteries.

Well, each hero specializes in a core aspect. We recommend reading their weapon type profile section to check the strength.(Hero menu -> hero -> top-left corner info). For example – Raven can get through the narrow passes and spot enemies at a distance. Firefly excels in using the sniper rifles. It’s better to go through each hero’s profile and use the one that suits your gameplay style.

Speaking of stats, legendary and mythic-grade heroes are the best ones.

Players can acquire Bullet Echo heroes from the chests. You can get the chests by getting victories from the battle royale matches, completing the quests, as a ranking reward, from the shop, etc.

Bullet Echo game has three main currencies; coins, bucks, and batteries. Bucks – use in the shop to buy premium chests. Coins – to train and raise the tier of the heroes. Batteries – to raise the hero abilities.

You can get bucks from the chests or level up rewards or the missions.

By playing the game, from chests, mission rewards, events, etc.

Batteries can be acquired from the league chests or rank-up reward; win matches and get trophies to rank-up. At certain rank-up levels, you will be rewarded with coins, chests, batteries.

So that’s all for now in this post on Bullet Echo tips, tricks, cheats & guide for beginners. Share your tips & tricks in the comments below.