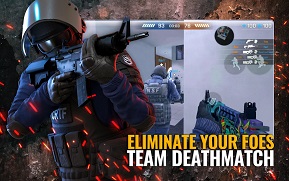 NHN Corp., well-known for Crusaders Quest game, recently released a top-notch FPS game called Critical Ops: Reloaded on Google Play Store and iOS App Store. It sets off in an exciting battlefield where you will be fighting against real players in real-time in a variety of intense action game modes. We have been playing this mobile FPS game for a while now and going to share an honest review that covers all the aspects such as F2P or P2W, gameplay, graphics, controls, etc.

F2P/Free-To-Play vs P2W/Pay-To-Win: Critical Ops: Reloaded is a completely F2P game. All the players get all the guns and gear for free. There is no upgrade system to weapons and gears. You can not get any sort of advantage by spending the money. Complete fair gameplay.

The gameplay differs based on the game mode you are playing. In our opinion, the best game mode is team deathmatch as it’s more intense, fast-paced, and focuses on shooting. To win in this mode, you will want to shoot as many enemies in the given time. All the players spawn on a random map and prepare for the battle; while preparation, you can select the guns and gears. After the battle starts, chase and hunt down the enemies with headshots.

Other than that, you can host private game modes.

All guns are free.

You can earn these currencies by completing the missions.

Players can adjust the FPS in the settings -> graphics. It lets you set on 30 FPS, 60 FPS, 90 FPS, and 120 FPS. We played it on Oneplus 7; it was rendering around 60 FPS. You can check the FPS in the bottom-right corner while playing the game.

In the battle – after you eliminate an enemy, you can pick up its gun; all you need to do is aim over the dropped gun. Swap the weapons by tapping the weapon tab in the bottom-right corner. At a time, you can have up to two guns; SMG/AR/Sniper or a Pistol. Also, you can have a melee weapon + other gears; grenades, flash bombs, etc.

Critical Ops: Reloaded has ads and IAPs. Players can spend real money and get the critical cash that can be used in the shop to buy the gun skins. Or they may add premium season function in later updates.

So that’s all for now in this post on Critical Ops: Reloaded review. Share your reviews on this game in the comments.