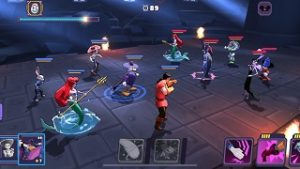 We have been playing Disney Sorcerer’s Arena(short for Disney Area) for a while now. It’s a turn-based strategy game featuring PvP Arena, Sorcerer’s Arena, Tower, Tournament, and a variety of other PvE game modes. You will get to create the squad of Disney and Pixar heroes – each hero character with different active, basic, and passive skills.

For F2P players, it would be grindy and slow – and, you may hit a paywall later in the game. Yeah, it’s fun in the beginning – but, after playing for a while, you realize there’s a terrible energy system freezing you to grind the resources and equipment for the characters; 1 energy replenishes every 6-12 minutes. Once you have consumed all, there is nothing to do except waiting for hours for energy to refill. Of course, there are other modes to play – but you need to grind in the campaign mode to make the characters stronger.

It favors the P2W mechanics; you can buy the characters with real money, replenish the energy quickly with the gems. Also, there is a “Passholder” system – buy the gold pass with real money and get more rewards. Keep opening the loot boxes with an unexpected drop rate of the characters. You either pay or grind for months for the new characters to show up in your compendium.

It brings nothing new to the table. Just a rip-off of other games in this genre where you build the team of characters and use their skills to defeat the opponents. The strategic part is building the team with a balanced combination of offense, defense, support, CC characters. Speaking of the battle system, you will select the enemy and use the character’s skill for inflicting damage. Clear waves, get XP, level up, unlock new functions, grind gears, gold, in-game currencies, blah blah blah! You can even set it to auto where it plays itself. If you have played games like Marvel Strike Force, Star Wars: Galaxy of Heroes, then this is the same thing but with Disney+Pixar skin.

It’s meh! Microtransactions, pay for full characters, gems to buy loot boxes + pass subscription + ads. You can watch video ads to replenish energy. There is a pass subscription to give you more rewards by completing the quests. Several characters in the game can be bought directly from the shop. You can buy gems with real money and open an endless number of loot boxes and quickly collect the favorite heroes. If your kid is playing, better check the credit card.

So this would be all in this Disney Sorcerer’s Arena Review. If you are a fan of Disney/Pixar characters, give it a shot.

And, if you are new to the game take a look at this Disney Arena Tier list, guide. Share your review in the comment section below.