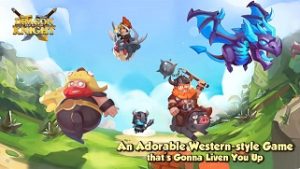 EYOUGAME(USS), the mobile game publisher, well-known for publishing MMORPGs, has added a new game to the portfolio. The new game is called Dragon Knight: Realm Clash. It offers idle gameplay, PvE expedition, base management, and legion like features. Well, it seems to be a copy of the Lords of Dragons game, which is published by Three Pandas Studios on Google Play Store. We don’t know whether the developers have teamed-up or copied the game – but, it’s a sure copy of Lords of Dragons; same mechanics, art-style, graphics, etc.

Here’s brief info on this game; it plays in landscape mode – just like the Lords of Dragons(we played that game a long time ago when it was published). The characters and graphics are cute. You will start from the adventure mode – the map full of challenging stages and treasure. You will progress stage-by-stage and fight the demons and continue exploring in the adventure mode. The tutorial guides you on how to switch between different parts of the screen; adventure, town, territory. That’s pretty basic stuff.

The battles are idle; all you need to do is assemble the team of heroes and put them on the formation board. There is a gacha system; while in the town, tap the tavern building and on the next screen you can spend diamonds or other currencies to draw/summon the heroes featured in the gacha pool. You may get a lot of shards or other premium currencies.

As you level up in the game, you will get to join the legion guilds where you can participate in the group activities; construction, wars, etc. and earn the exclusive legion currency that could be used in the shop for a bunch of premium packages.

There is a VIP, which gives you perks and packs. To power-up, you can upgrade the lord, deploy more heroes, equip gears, level up heroes, advance heroes, enhance their gears, collect artifacts, advance dragons, inlay gems, and there is much more.

You will need an internet connection to play this game.

So this would be all in this post on Dragon Knight: Realm Clash game overview.

If you are new to the game, you can find the CD KEY here and redeem code for gift packs.

Share on TwitterShare on FacebookShare on RedditShare on WhatsApp