GOAT Games, the publisher behind War and Magic game is all set to release a brand new MMORPG called Dragon Storm Fantasy on mobile app store 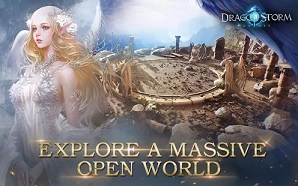 Dragon Storm Fantasy is a brand new open-world MMORPG, featuring three character classes – Warrior, Archer, and Mage. The player can play as a warrior, archer, and a mage. Each class offers unique skills, gameplay style, look, and attacks. For example – Warrior Class has the best defensive skill, Archer Class comes with the best DPS skills and the Mage Class has the best magical spells.

As soon as you select the class, the adventure journey will begin. You will start the game with a tutorial that teaches you all the basic stuff. And, like other MMORPGs, In Dragon Storm Fantasy too, you will be completing the quests; interact with the NPCs, complete the quests given by them, slay down the monsters, grind the resources, level up, unlock new stuff, and there are plenty of things.

Well, if you have been playing the MMORPGs on mobile for a while now, then chances are you will find it similar to those games. The goal is to build the character – make him/her stronger by leveling up, equipping the best gears, upgrading the skills. You will fight the monsters in PvE modes, PvP mode – where you unleash the character’s skills to strike down the opponent in no time.

In our opinion, it’s the reskin of other MMORPGs. Google Play Store has a ton of games like this. If you love MMORPGs, then try it – and, share your opinion in the comment section below.

You can get this game for free on the Google Play Store. The download link is given below. Its download size is around 250MB.