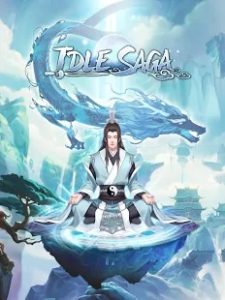 This game is similar to the Immortal Taoists game, which is published by Entrepreneur Game on Google Play Store. Or the best word we can use is Rip-off. Although, it has better graphics. At the start of the game, you will choose a class; Discipline, Orphan, Desperado, Hunter, and Scholar are five classes to choose from. Each class in Idle Saga is different. After selecting the class, you will choose the server and start the journey.

The gameplay is pretty simple – your character farms attainment automatically, that you use for the breakthrough. In other words, the character practices and farm attainment. As you perform the breakthrough(s) Aerify level increases and at a certain level, you get to ascend and access other functions. There is a training mode where you can hunt the beasts and earn gears, in-game items, currency, etc.

The objective is to make the character stronger – equip him gears, upgrade the attributes, technique stats, and then you will be able to take down the powerful NPCs in guild duel matches.

In the house, you produce resources such as gems, food, wood, and iron. These resources are required to make upgrades. The player can summon the servants and place them in the house to produce a specific resource.

Other than making the character stronger, Idle Saga challenges you to complete the missions. These missions will give you a ton of rewards and guide you throughout the game.

If you have played the Immortal Taoists game, you will find Idle Saga familiar and with better graphics. It’s a good game to pass some time. If you love Idle games, then you should give it a shot.

So this would be all in this post on the Idle Saga game.