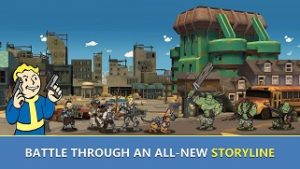 Fallout Shelter Online is the upgraded version of the offline Fallout Shelter game. We have been playing it for a while now and going to share an honest review that covers all the aspects of the game; f2p vs p2w, gameplay, graphics, monetization, etc. The review is based on the “SEA” version of the game, which is published by Gaeamobile on mobile app stores.

You will start the game by creating a “vault” and meet Overseer(vault manager in the early game) and his assistant(Jenny) who guides you throughout the game. After completing all the “prologue” quest, you will see “Overseer” checking the core facilities in the vault – but, something gets wrong all of a sudden and he leaves the vault. Now, you are the only one left in the vault. And, the game makes you in charge to regulate all sorts of vault activities.

It takes you to the wasteland where you have a vault to manage. You will build and upgrade the rooms of different types; each one provides different facilities – like producing the resources, crafting the equipment, leveling up the dwellers. You proceed through the stage mode, which is available in multiple difficulties; starting with easy, then medium, hard, and at last, the master.

The main challenge is to set up the squad of the dwellers to eliminate the enemies from all over the map. It allows you to build a team of up to five dwellers that explore the rooms in the enemy’s vault. You will navigate the team room-by-room and search for the enemies to take the fight and loot the materials. In PvE, you can choose to unleash the dwellers’ skill manually. But, In PvP, the battle is completely automatic.

The one thing we didn’t like is the energy system. To play the stages or sweep the stages(players can sweep the competed stages and get loot immediately), you need RAD-X, which replenishes slowly. With Nuka-Cola Quantum, you can buy it immediately. This energy system gives hard time to grind materials – as a f2p player.

As you proceed further in the stage mode, you encounter the powerful enemies and that makes you work on the dwellers. Choosing the right type of dweller, considering the bond effect, making upgrades are some of the things that you will be managing. In Fallout Shelter Online, there are lots of dwellers/characters that you can recruit and use in the team or producing resources in the vault.

Most of the characters are locked behind gacha while several of them can be purchased with the premium currency called Nuka-Cola Quantum. The drop rate is not quite good; merely ~1.5% as per the current version of the game. It does guarantee one SR or SSR if you draw x10 at once. This x10 draw pull costs around x2250 pre-war money that you mostly earn from the daily quests and events.

As said above, other than the gacha, you can spend Nuka-Cola Quantum, the premium currency in the Fallout Shelter Online world in the poster shop. Posters are “character’s shards”. When you have enough of them, you get the character. For SSR, you need x80 posters. For SR, you need x30 posters. The poster shop is the section where players can directly purchase the posters with the Nuka-Cola Quantum.

Other than the fights, dweller-management, you have a vault to manage; build the rooms, upgrade the rooms, assign the dwellers and pets to improve production, craft gears, etc. As the level increases, it would take more long to finish the upgrade; the timer amount increases per level.

So that’s all in this Fallout Shelter Online gameplay review.

Fallout Shelter Online offers all sorts of perks that players can avail to speed-up the progression by spending real money. Take the example of character collection; you can spend the premium currency Nuka-Cola Quantum to buy the character’s posters. As a f2p, it’s quite hard to earn this currency. It would take ages to collect and develop SSR characters. Also, you can finish the upgrades immediately, buy RAD-X, and do more sweeps.

So that’s all for now in this post on Fallout Shelter Online review. Share your reviews or opinions on this game in the comments below. If you are new to it, check out this FSO guide and tier list.