Published by KOMOE TECHNOLOGY LIMITED, Figure Fantasy is a brand new 3D Idle RPG where you build a team of figurines to fight enemies 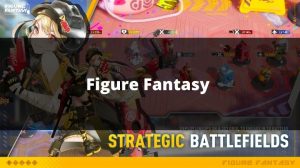 Figure Fantasy has been just released worldwide on Google Play Store and iOS App Store. It was soft-launched in selected countries, now available to all the players. It follows the classic IDLE RPG game mechanics with 3D graphics and environment. You will be collecting, developing, and using the figurines to fight enemies in a variety of game modes.

As the game genre suggests, it’s idle, so you can go AFK and still grind resources, which are used in developing figurines aka characters. There is a great collection of figurines in the game; there are tank figurines to soak damage from the enemies. HEALER figurines to heal allies. Supporter figurines to provide buffs and boosters to allies. DMG Dealer Figurines to inflict DMG on the enemies.

You are free to choose from available figurines and build a good team to beat the enemies. Each character or figurine possesses unique skills, strengths, and traits, which you should know to build a good team.

The idle battlefield is good-looking, graphics too. If you are looking for game like AFK Arena, then Figure Fantasy is the game that you should try. It has similar mechanics; gacha system, idle gameplay, PvE, PvP, and more.

Speaking of the game’s size, it’s around 490 M on Android, 594 on iOS. With additional game patches that vary based on the device.

If you are planning to play this game, then make sure to check out the Figure Fantasy Codes and its tier list for a head start and freebies.