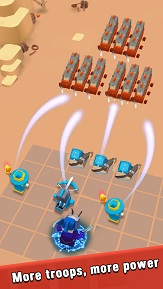 Art of War: Legions is a popular strategy game where you set up the formation consisting of heroes and the troops. It plays in portrait mode and features PvE and PvP game modes. The PvE features normal battle stages, chapters(expedition mode), etc. Also, it has a lot of beautifully crafted heroes and troops. And, to be honest, this game is one of the modern unqiue mobile games. We did our best in research and selected a few similar games that you may like. So without any further ado, let’s get started and check out the list of best games like Art of War: Legions.

Following is the list of mobile games similar to the Art of War game, published on the mobile app store: –

Another game from the creators of Art of War: Legions. Art of War: Heroes is much focused on the heroes than the troops. It’s simple, easy-to-play, and beginner-friendly. The graphics, gameplay, art-style of heroes, UI is much like Art of War: Legions game. It features around 30 levels in multiple difficulty game modes.

Army Clash is another great game and worth playing if you are looking for games like Art of War: Legions. Although, it has a lot of ads. In the game, you will build the army of troops and progress through the challenging levels. There are hundreds of levels to complete – with increasing difficulty.

This game is released by the same developers who released the Art of War: Legions game. The graphics quality is pretty much similar. Speaking of gameplay, you will progress through the city map where you compete with rivals in war battles. You will get to set up the formation with a large variety of troops available. Just like the Legions game, you can merge the troops, move them across the formation tiles for the best use, etc. The only different aspect here is building mechanics; you will build and upgrade the facilities such as barracks, city hall, laboratory, mines, etc.

Another game from the same developers. It is pretty much similar to the Legions game when it comes to the graphics, art-style, progression, etc. Speaking of gameplay, you raid the enemy buildings, occupy them, and progress further into the game. In this game, you will be playing as a commander who leads the army of different troops. As you proceed a bit, you will encounter more challenging levels; upgrade barracks, raise the power of troops, and conquer the enemy territories.