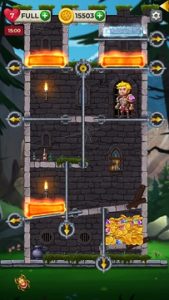 If you have been playing mobile games, especially the games containing ads – you might have seen the ads where you solve puzzles and save the hero. Usually, the Hero Wars, Gardenscapes like games run these types of ads – but, they don’t feature the content shown in the advertisement. These ads are getting popular nowadays and several developers have recently published the games like you see in the advertisements. So without any further ado, let’s check out the best games like Hero Rescue for Android & iOS: –

Following is the list of games similar to the hero rescue game where you solve the puzzles and save the hero: –

Lucky Knight – Rich or Dead is the latest game out there that is similar to the Hero Rescue game. It’s published by the Adquantumn on mobile app stores. In the game, you will be solving the puzzles; the goal is to help the knight collect gold. The initial levels are easy to complete – but they soon get challenging as you progress further a bit. Any wrong move can cause the knight’s death. There would be lava and gold coins set in different sets of the scene. You will pull the pins/spears strategically so that the knight would not die.

Get the Girl is among the top best games like Hero Rescue and the ads that you see all the time in the mobile game ads. It’s available on Android as well as on iOS. You will help the girl by solving the mind-blowing puzzles. We have been playing this one for a while now and it’s been superb; the gameplay is fun and addictive. There are lots of challenging levels to complete. Each level brings you a new puzzle to solve.

Rescue Knight is another one of the best games like Hero Rescue where you save the knight and get his girl back. It has hundreds of levels – quite easy to complete though. All you do is touch, pull, and drag the right pins and avoid the lava. The graphics are good. The gameplay is easy, fun, and enjoyable.

Hero Quest: Epix Rescue is published by IceFox Studio on Google Play Store and iOS App Store. In this game, you help the hero slay down the kidnappers. You will have to pull the right pins to rescue the fiancee and complete the level. Else, you are gonna be the target of the killer. There is no lava – but there are killers to slay you down if you pull the wrong pin.

If you are on iOS, the original Hero Rescue game is available there. The developers of the game are constantly adding new levels to the game. It was available on Android – but, it seems that now it’s removed from Google Play Store.

So this would be all in this post on best games like Hero Rescue for Android & iOS – all these games feature the content that you see in the ads; pull the pins and save the character. Do you know more alternatives? Comment below.