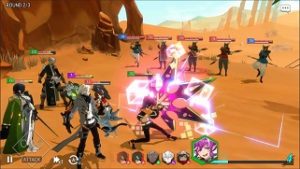 Published by CloverGames, Lord of Heroes is a turn-based RPG with all sorts of PvE and PvP game modes that you usually get in today’s modern mobile RPGs. The gacha mechanics in this game focuses on equipment – you will collect heroes without gacha, but high-tier equipment is obtained from gacha. Overall, Lord of Heroes is a great mobile game – it has great graphics, turn-based strategy battles are quite interesting, the community is small but great. In this post, we have shared games like Lord of Heroes.

Hero Cantare is a Korean RPG, now available in the English global version. Published by NGEL Games Co. Ltd., Hero Cantare offers classic PvE modes; dungeon, tower battles, story mode, bosses – and, also it has PvP arena mode where you compete with other players all across the server. The game has decent graphics, lots of heroes to build and collect. If you love gacha games and looking for a game like Lord of Heroes, you may consider Hero Cantare – it’s probably the top-tier game as of 2020 on mobile.

Published by Smilegate Megaport, Epic Seven is among the top-notch gacha games with challenging turn-based RPG battles where you build the formation of top-tier heroes to fight in the PvE and PvP game modes. Released in November 2018, Epic Seven is still getting regular updates – content as well as new characters. There are over a hundred heroes to collect and build with the perfect artifacts. You may consider Epic Seven if you are looking for an alternative to Lord of Heroes. It has gorgeous graphics, the art style is good, battles are challenging, the community is large.

Netmarble released this portrait gacha RPG back in March 2020 and it’s been in the top #10 list on USA Google Play Store. Based on popular anime Seven Deadly Sins Grand Cross, the 7DS game offers turn-based RPG battles just like Lord of Heroes – you are free to set up a team of heroes that you like or think they are best fit in the formation. Its PvE story mode is great – if you like PvP, it’s also there.

Exos Heroes is the latest gacha release in the mobile market. Published by LINE GAMES on iOS and Google Play Stor, Exos Heroes has a great PvE mode with an exploration system where you explore the map, participate in random events like fighting goblin, fixing the ship, etc. Its graphics are gorgeous, there are lots of heroes to collect through gacha, make them powerful with equipment.