Looking for the games similar to Mow Zombies where you shoot the zombie enemies? Read on for the best games like Mow Zombies for Android & iOS

Mow Zombies is a top-down shooter game that is available on Android & iOS platforms. It’s published by Digital Native on Google Play Store and Forever Saturn Corp. Limited on the iOS App Store. The game offers portrait shooting gameplay where the player controls the character on a vast map and shoot down the zombies and their boss. If you loved that game, you might be looking for alternatives. In today’s post, we have listed the top-notch games like Mow Zombies. So, without any further ado, let’s check out the main content.

Following is the list of best games that are similar to the Mow Zombies game: –

Published by Machbird Studio, Missions: Zombie Removal is a portrait top-down shooter game available on Android & iOS platforms. In the game, you will be controlling the main character with a single joystick controller; the character shoots the zombies automatically. All you need to do is keep the main character away from the zombies so that it would take any sort of damage and lose HP. The game challenges you to survive on the map where you are the only human – while rest are the walking dead bodies that we call the zombies. It offers simple and fun gameplay with great graphics; collect the powerups, dodge the enemy attacks, fight the bosses, and much more.

Published by TBG Limited and Dot Joy on the mobile app stores, Zombie Haters is another top-down shooter game that plays in portrait mode just like Mow Zombies. In the game, the main character shoots the enemies automatically when they are in range. You need to rescue other survivors, dodge the enemy attacks, and finish the challenges. There are lots of heroes to play with; you can upgrade them and make them stronger enough to take down zombies. 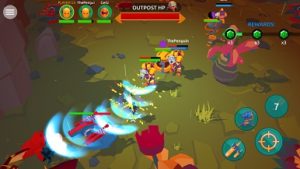 Space Pioneer is another great shooting game like Mow Zombies – although, it’s not offline + portrait. But it does offer the action-packed shooting gameplay like Mow Zombies. Here you will be fighting the alien enemies on the space maps; the game environment and the characters are beautifully designed. The gameplay is fun; you get to play against real players in real-time + it also offers PvE action that you can enjoy on mobile.

Safe Zone is a popular shooter game like Mow Zombies – it plays offline and in portrait mode. Although, the gameplay is not advanced as other games listed here. It offers pretty basic gameplay where you use one finger to lift the character up and down and shoot the zombies – your character moves and shoots automatically. All you can do is lift it up or down based on the situation. There are lots of guns to collect and challenges to finish.