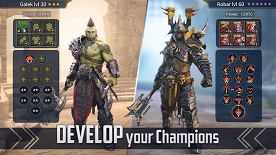 Raid Shadow Legends is a popular gacha RPG with hundreds of characters/heroes available in more than 5 factions. Players collect the characters and build the team to fight enemies in classic PvE and PvP arena game modes. The game features turn-based strategy battles with an auto-play/manual mode where heroes on the combat field unleash the quality skills to eliminate the opponent squad. Although, the game is not f2p friendly, but does offer great graphics, lots of game modes to play, and much more. If you loved that game and looking for similar ones, then you have landed on the right page. This post shares the list of games like Raid Shadow Legends on Android & iOS 2020. So, let’s get started.

Knighthood is one of the best games like Raid Shadow Legends. We’ve spent a lot of time in this game when it was in beta(Soft-launch). Recently, King, the publisher of the game, published Knighthood game globally on Google Play Store and iOS App Store. It offers amazing turn-based combat and lots of heroes to collect and develop. Although, it plays in portrait mode. The graphics, UI, animations, combat mechanics are good.

Epic Seven is another one of the best games like Raid Shadow Legends. Like Raid Shadow Legends, In Epic Seven too, you will have a great number of characters to collect and use to build the best team in a variety of game modes. Not only the hero collection, but Epic Seven is also good when it comes to the combat system(team-building, unleashing skills of characters in the battle, turn-based mechanics). We have played this game for months. The character-art is amazing, graphics are beautiful, and combat is challenging.

Exos Heroes is another beautiful game like Raid Shadow Legends. Just like Raid Shadow Legends, Exos Heroes challenges you to build a great team of heroes to eliminate enemy squads in PvE and PvP game modes. The PvE is amazing; there is exploration, grinding modes, cute mini-things like a broken airship, moving the team on the map and look for treasure goblins, etc. It just got released recently.

You can check the games like Exos Heroes here.

King’s Raid by Vespa Inc. is an amazing game like Raid Shadow Legends. The storyline is great/PvE – great story and combats that get competitive as you continue to the stages. You will have a lot of anime-like heroes to recruit and use in the team. Also, the game features PvP(player vs player) mode where you compete with other players and their built teams.

So that’s all in this article on games like Raid Shadow Legends. If you have got any suggestions, do let us know in the comments.

Do you love playing mobile games? Subscribe to our YouTube Channel – Gaming Soul for new mobile game videos. For More Updates, Game News, Game Guides, New Game Releases, And ALERTS – Like Us On Facebook – Gaming Soul, Follow Us On Twitter – Gaming Soul. Check Out – Best mobile games. Do you have any suggestions? Submit Here