If you are looking for the games similar to Shop Titans where you can craft and sell things, then check out these best games like Shop Titans

Shop Titans is a popular shop management game available on Android & iOS platforms. In the game, players craft a variety of items and sell to the customers for currency, which can be utilized in the shop’s accessories or expansion. The game also has RPG elements; players can recruit the heroes and send them on an idle expedition where they fight the monsters and gather the crafting material. If you are looking for Shop Titans alternatives, then we have got your covered. In this post, we have shared the list of best games like Shop Titans to play on Android & iOS platforms.

You would be shocked to hear that Shop Titans game is built on the same mechanics offered by the Shop Heroes game. It was released back in 2015 and still getting updates in 2020. Unlike Shop Titans, Shop Heroes plays in the landscape mode. In the game, you will be crafting the items and selling to the customers for the currency. You can hire the workers to craft a variety of items. As you sell the items, you will level up and new advanced functions of the game such as quests, Inn, the leader gets unlocked.

Hero Park is a unique popular game available on Android & iOS platforms. In the game, you manage a town where you can build the facilities; in each facility, you can craft the items and put them on sale. After that, you will attract the customers to the town and sell the items for the cash. The game is well-designed; there are lots of characters that you can employ in the town shops to sell the stuff and make money. There are lots of characters to recruit, buildings to construct, dungeons to explore, quests & challenges to complete.

Warriors’ Market Mayhem is another one of the best games like Shop Titans. It’s an offline game where you manage the shop and the crafting stuff. Players can recruit the warriors and send them on adventure expeditions where they grind the crafting materials. These material items will later be used by the workers in the shop to craft unique gear items that people of the Kingdom love to buy. Complete the orders, earn coins, and hire more workers to ease the shop business. It has nice graphics and gameplay is also good.

Royal Merchant is a traditional RPG with Ship Simulation gameplay. In the game, players hire the heroes and send them on epic adventures to slay down the monsters and grind the crafting materials required to craft specific things. It features pixel-art graphics and plays in the portrait mode. You get to craft potions, weapons, gears, wooden objects, clothing material, jewelry, and much more. 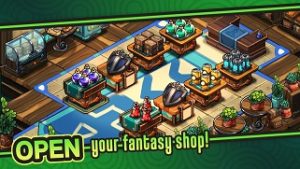 As of now, this game is in early access – if you are Android, you can get it for free from Google Play Store. It plays in landscape mode; you will buy the items from the market and sell it on the shop to the customers to earn a profit. Other than that, you can initiate the idle exploration to grind the materials and currency. Since the game is in beta, you might see more functions in the future updates.