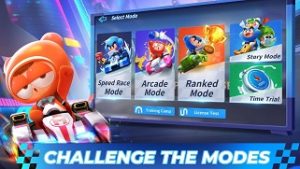 Nexon’s KartRider Rush Plus game is now available worldwide; people from Asia(SEA), North America(NA), and Europe(EU) region can download the game for Google Play Store and iOS App Store. It has all sorts of crazy tracks where you will be driving the amazing karts, beating others, and knocking them down with the trap items. If you love the Mario Kart game, you should give this game a shot – unlike Mario Kart, KartRider Rush + plays in the landscape mode, which is pretty good.

You start by creating a chibi character; the characters in the game are called racers. You will be given two racers for free – permanently. The one is a male and the other one is a female character. Also, as a newbie, you will be given a few karts – out of all, the one would be permanent. It has got some sort of Garena Speed Drifters game mechanics where you can rent the racers and karts for a few days and pay a small amount or pay more for permanent possession. Also, there are pets in the game that you can use for the bonuses like an immunization to the trap items.

At first, we thought the karts, pets, and the racers stuff is just cosmetics and there would not be any sort of extra bonuses from specific karts/racers/pets. Well, that’s not true. Karts have different stats; some of them have special skills too. For example; Rudolf is one of the Epic tier karts with special bonuses like complete resistance to banana peel trap item, nitro bonus, ability to escape water bombs, and water flies.

Players can buy the karts with K-Coins and Batteries. Also, some of the cards can be obtained from the season pass. Batteries can be gained with real money. K-Coins can be earned by playing the game or you can exchange batteries for this currency. It would cost a lot of K-coins to buy a kart for permanent possession. As a f2p player, you will be earning the K-Coins from the quests or events, which are limited. If you spend money and buy the batteries, you can have as many K-Coins as you can – and, you can use them to buy the cars from the shop.

Racers – they only affect the number of rewards that you get from the races; particularly EXP and Lucci. You can buy them from the shop in exchange for specific currencies; outfit medals that can be obtained from the club events. Speaking of pets, they give you immunity to water bombs, missile-like destructive items during the race.

For a f2p player, it would be hard to buy the karts or pets or more racers as they give you these items for a temporary time as a newbie – and, for a full-time possession, you will have to spend a lot of K-Coins or batteries. There is no way to get batteries by playing the game. For K-Coins, you will have to grind a lot through the quests or events.

KartRider Rush Plus offers a lot of game modes to the player; speed, arcade, story, ranked, etc. You would love to drive the kart on tricky tracks where you will be drifting, knocking down the rivals with crazy trap items, and beating them in all the laps to get the #1 rank. Players can create private rooms to play with friends or public rooms to play with random players. The racing tracks are well-designed; they are so beautiful, there would be lots of obstacles on the way to dodge, drifting points where you will drift and charge up the nitro.

KartRider Rush Plus is fun to play – you would not need any “pro” skills to master the game as everything is beginner-friendly; controls, drifting, nitro charging, etc. It has also got the customizations; you can design the house with decorations, racers with cute outfits, karts with accessories. The graphics are great; karts, racers, race tracks are beautifully designed. The controls are easy to learn. Overall, the gameplay is good.

KartRider Rush Plus does not feature any sort of ads. It has in-app purchases; you can buy batteries with real money ($0.99 to $89.99). There is a Delux pack that costs $2.99 – it gives you several perks – for example; no one would be able to kick you out from the room, you will get more Lucci, batteries every day, etc. Other than that, you can buy the season pass for premium rewards; several karts are only obtainable from the season pass.

We would rate KartRider Rush Plus 3/5 stars. Highlights: –

So that’s all for now in this KartRider Rush Plus game review. What do you think about this game? Share your reviews in the comment section below. If you are new to this game, you might want to check out the beginner’s tips.