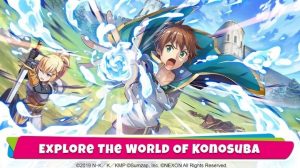 Konosuba Fantastic Days is an anime gacha RPG for Android & iOS featuring cute characters and team battle gameplay. As a player, you will collect the characters, make them stronger, use them in the team to fight enemies. The game is packed with a classic campaign story mode where you will head first right after the tutorial and as you progress further, the game will let you access more challenging and difficult modes like PvP arena.

It plays in landscape mode, features a great collection of cute anime girls, battles are good, graphics as well. If you like playing Anime gacha RPGs, you should try Konosuba Fantastic Days.

A Spectacular Anime RPG brimming with fantasy, laughter, and EXPLOSIONS!
KonoSuba: Fantastic Days is here to transport you to another world.

You have been summoned, brave traveler, to a world threatened by the Devil King’s army in the first KonoSuba mobile game ever to be released globally. The journey may be long and perilous, but do not fear! You won’t be going empty-handed…joining your party will be all the KonoSuba characters you know and love, along with some fresh new faces.

Embark on your adventure, and rescue the realm from the forces of evil! Although, when it comes to Aqua, you may have to do most of the rescuing yourself…especially against those pesky giant toads.

◆ Journey to Another World
Join the newly reincarnated Kazuma on his quest to laze around and live a carefree life. Unbeknownst to him, he’ll soon be tricked into saving the realm from the Devil King instead! Relive your favorite slapstick moments from the KonoSuba series with scenes exquisitely rendered in expressive Live2D animations.

◆ A New Adventure Unfolds!
Discover riveting storylines exclusive to the game and meet a colorful, new cast of heroes and heroines along your path. Listen to their tales and uncover what drives them through the engaging character & story missions.

◆ A Party of Lovable Goofs
Collect, dress, and forge unbreakable bonds with your favorite KonoSuba characters including, but not limited to:

◆ A Real-Time Playable Anime
Select your party based on elemental attributes, and face the hoards of devils and monsters in a unique and intuitive blend of real-time and turn-based combat. Activate explosive skills with dazzling cinematic skill animations at the tap of a finger and climb to the top of the leaderboards in the Battle Arena!