TurinGame has recently released a brand new MMORPG called Land of Doran on Google Play Store. Here’s everything you need to know about Land of Doran game 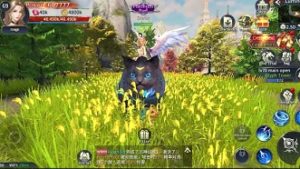 There are lots of MMORPGs out there on Google App Store and one of my favorites is Rangers of Oblivion by GTarcade. Speaking of other MMORPGs, nowadays, they only come with the auto-battle system, VIP amd lots of P2W elements. In this post, I am going to give you an overview of the latest MMORPG called Land of Doran, which is released by TurinGame publisher on Google App Store. So let’s get started.

Contents hide
1 Land of Doran Game Overview
2 The Gameplay
3 Is It P2W?
4 Is It Worth Playing?
5 Download Land of Doran

In Land of Doran, you will be playing as a warrior, mage, and archer. It features three unique classes – each with different gameplay styles, skills, stats, advantages. For example – playing as an archer, you get to shoot enemies from a range. At the beginning of the game, you will have to choose a class – it could be warrior, mage or archer – the choice is yours.

The game’s download size is around 400 MB – after full download, you will get a special reward, which includes sapphire, EXP potion, giftpack, etc.

The game has got a variety of modes; peace, allies, all, and realms – you can opt for any mode. For example – with all mode selected, you can attack other players, while when you are in peace mode, you can not attack any player.

The Land of Doran Gameplay is not quite good – everything is auto; you just sit & watch -> gear up, upgrade, and that’s it. At least in the beginning. Although, as you progress through the game, you will have to make the character stronger, auto-battle would not work like before because the monster would be hard to beat. In the beginning, you just tap the quest and the game itself instructs the character to do that quest – and, then you claim the rewards.

You can disable the auto-mode anytime and control the character manually – so that’s a great thing if you hate auto-mode. With manual mode enabled, you can use the character’s skills at the right time – precisely. But with auto-mode, that’s hardly possible.

Other than the quests, you have lots of things to do; grinding, challenges, building the character, guild, mount building, etc.

Yes! There is a VIP system, lots of recharge options to get stronger in no time.

Is It Worth Playing?

Well, I am not a fan of games that feature a VIP system, have auto-quest/battle modes – it makes the game boring. So I would not suggest you waste time on this game. The choice is yours.

You can download Land of Doran on Android from Google Play Store.