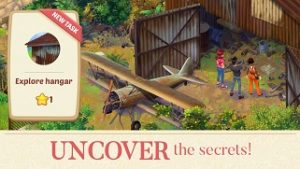 Tactile Games, the mobile gaming publisher, well-known for Lily’s Garden is now back with the sequel. Their new game Lily’s Mansion has just been out for Android on Google Play Store. Following the original version, the sequel challenges the player to restore the mansion of Lily, the main character of the game. Speaking of gameplay, it features the classic match-3 mechanics where you match the same color tiles and completes the goals.

In the Lily’s Mansion game, the sole objective that you must attain is helping Lily restoring the mansion. Just like the original version, you will be solving the match-3 puzzle levels with increasing difficulty and earn the stars. Using the stars, you will build and repair things in and outside the mansions. Keep completing the goals and achieve the goal.

The game brings nothing new – it’s the same as other match-3 games where you solve the puzzles, get the stars, and build/renovate/repair the things. You will have a limited number of moves to complete these challenging puzzles; where you match the same color tiles, create the boosters, and progress through the levels. Earn stars, coins by completing the levels and use them for lives, building/renovating the mansion.

The players can connect the game with their Facebook account to save the progress or they can ask for the lives(hearts) from their friends.

The graphics and animations are pretty great – so is the story. The game is specially made for the people who are into this genre; some people don’t like these games, while some people are addicted to these match-3 games. If you love solving match-3 puzzles, then you should give it a shot; there are lots of challenging levels to complete! Can you help Lily restore her mansion? It’s broken and filthy. Build new things, decorate the mansion, complete the goals, and enjoy this fun relaxing match-3 game.

So this would be all in this post on Lily’s Mansion game overview.