Dungeon iDoll is a brand new Idle game for mobile. It is published by LinkTown on Google Play Store. The game features classic Idle Dungeon battles 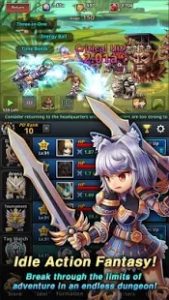 LinkTown, the publisher behind the Demong Hunt RPG series, has just released a brand new idle game called Dungeon iDoll on Google Play Store. It is available for free to download from Google Play Store. The game follows the story of demons and humans. You will be playing as a commander of the team to save humans from the demons who have started invading the human race.

Dungeon iDoll offers classic idle dungeon battles where you embark on an endless dungeon adventure – full of demons and their bosses. You will recruit and level up the idols to strike down the demons’ waves. Other than the classic adventure mode, Dungeon iDoll features the PvP arena, Boss Raid, and many more intersting game modes that you will love a lot. As you progress further into the game, you are likely to face more powerful demons than before. So make sure to get stronger by upgrading skills, equipping, gears, making upgrades.

Like all other Idle RPGs, you will grind the currency, items, and make the characters stronger to progress. There are plenty of characters that you can choose or experiment for the best formation, team. These idols have powerful unique skills that they use during the fight.

Overall, it’s a good game with decent Idle gameplay. Those who love playing Idle RPGs should give this a shot. It has decent graphics, lots of characters to build, game modes to play, and challenging fights.

So this would be all in this post on Dungeon iDoll. What’s your view on this game? Share your thoughts in the comment section below. Thanks for visiting us!