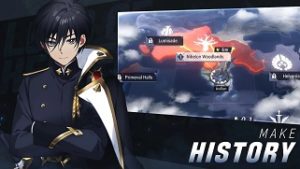 Welcome to Lord of Heroes guide! This post covers in-depth info on heroes or characters, about the best characters, Lord of Heroes tier list, rerolls, and other frequently searched questions like getting stronger, element tips, in-game currencies, equipment, and more. Let’s check out everything!

Unlike other gacha games, the Lord of Heroes game does not have hero gacha – meaning, you can recruit the hero directly with crystals, renown, through hero contracts, and IAPs. Although, it does have equipment gacha. Equipment of up to 6-stars grade can be obtained from the equipment gacha. An x10 pull in equipment gacha costs around x1,500 crystals. And, in the beginning, you don’t have this much amount of crystals. So, we don’t recommend rerolling – it’s a time waste. Alternatively, use this Lord of Heroes code and redeem for the top-tier artifact, replica, and soulstone, 100K gold. Don’t bother rerolling.

You can check the complete Lord of Heroes tier list here.

Heroes are the main characters in Lord of Heroes. In this part, you will get to know about their elements, classes/roles, and other aspects.

How To Get Heroes

Aforementioned, heroes can be recruited with crystals, Renown currency, by fulfilling their contract, from alliance shop using credits, and by playing the game; continue through the story. Crystals – earn crystals by doing feast missions, from the hall of trials, coliseum, and story missions. Renown currency – obtain it from the battles(story mode stages). Hero contracts – as you continue playing the game, you will get to sign the contract with the heroes. For example – Lairei(Fire Element) is one of the heroes that you can get at the start by logging to the Lord of Heroes game for 15 consecutive days.

To check the precise acquisition method, go to the lobby. Tap the heroes option. Select a hero that is locked -> tap the recruit button to check its source.

In Lord of Heroes, heroes belong to one of these six classes or roles; Guardian(Tank, high DEF, HP). Warrior(Melee, high DEF, fighters, great DMG stats too). Striker(pure damage dealers). Sniper(strikes enemies from the back row and cause great DMG and apply debuffs on the enemies). Cleric(excel in healing and providing a buff to allies during the combat).

In the heroes menu, tap on the hero, and on the lower-right side, you will see its class/role.

Not only heroes but also enemies have an elemental relationship in the Lord of Heroes game. These elements are Red/Fire, Green/Earth, Water/Blue. Light/Yellow, Dark/Purple. In the heroes menu, pay attention to the color of the hero in the bottom-right side.

Upon selecting a stage, you tap the ready button -> then go to the region info; check the enemy elements. Based on that, you can select the strong element heroes. For example – if the enemy’s element is blue/water, then you can go with heroes who have Earth/Green element as the Earth element is strong against the Water element.

With battles getting difficult as you progress, you should consider developing the characters that you are using in the team. In this part, we have shared all the ways and tips to get stronger in Lord of Heroes Global: –

Elixir of Insight or EXP bottle is an item that one can use to grant EXP to the hero and raise its level. You can get it from the story mode stages or expeditions or hall of EXP. Alternatively, the heroes that you have in the team gain EXP if you win a story mode stage.

Promoting heroes in Lord of Heroes is not easy as you will have to grind a lot of promoting materials such as square stones, triangular stones, round stones, and promotion agate. You can farm all these material items in the story mode; lobby -> world -> select the chapter/stage -> check the rewards; at higher levels, you get better quality rewards. The rewards include Elixir, Renown, Crystals, Equipment set, Promotion Agate, etc. You can repeat stages and grind these items; except Renown, Crystals – as these items are given only once – as a first-time clear reward.

All heroes have active and passive skills. Their performance in the battle can be boosted by upgrading these skills. Navigate to the lobby, select heroes, then select a hero from the list -> tap its skill icon on the lower-right side. It costs soul stones to upgrade the skills of heroes. Read the soulstones guide below.

Tip – don’t waste resources in upgrading the low-stars gear. Progress as far as you can in the story mode without upgrading gears; you will start getting better gears from the high-level chapter stages. Wait until then. If you are stuck, try changing team combination or getting an elemental advantage. Or level up heroes, upgrade skills – if still stuck, then upgrade the gears.

Soulstones are required to upgrade the skills of the heroes. Based on the hero element, you will need soulstones. Types of Soulstones in Lord of Heroes: –

Obtain Mystic Stone by raising the level of the primeval hall.

Lord of Heroes features three types of equipment; replica, artifact, and normal. You can craft equipment with crafting materials obtained from the hall of trials or dismantling useless equipment. You can get equipment from alchemy; gacha/spend crystals – also, from the story mode, expedition, hall of trials, music shop.

Equipment is available in six grades; 1-star to 6-star. The higher the grade, the more stats it grants.

Equip heroes with a certain number of gears of a specific type to activate equipment bonuses: –

Tap on the gear item to check its belonging set. Equipment set bonuses can improve your team performance in the battle.

Progression Guide In Lord of Heroes