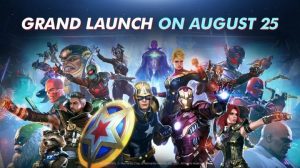 The game starts with a short movie and a tutorial, which you can not avoid. You will get to play all the playable characters like Black Widow, Captain America, Captain Marvel, Spider-Man, etc. in the tutorial. After the tutorial is completed, you will get to pick a starter character. There are four slots available for each player, in each slot, you can select one character.

You can choose to play on another server if you want to try all the characters. After that, you will start the adventure. In Marvel Future Revolution, players progress through PvE mode and eventually take part in competitive modes like PvP, Blitz, Dark Zone, etc.

They will have to make the character stronger aka build them wisely by choosing the right skills, omega cards, costume sets, specialization, cores, battle badges, etc.

If you are not sure which character is the best, take a look at this Marvel Future Revolution Tier List Guide. And, don’t forget to redeem these MFR Coupon Codes.

The game’s size is around 6GB and offers quality graphics, the gameplay is OK, animations are good.

Explore a massive & immersive open world.
Enjoy various interactions with other heroes across various MMO regions!
Play alongside others in an original, fully realized Marvel universe!

■▶ An all-new Marvel universe based on original stories

Embark on an epic campaign as a Marvel SuperHero.
Enjoy captivating gameplay experience with endless storylines and missions!
Join Omega Flight’s mission to save Primary Earth from the threat of the Convergence!

Endless high quality costumes that have never been seen in any Marvel IP game.
Mix and match different costume parts inspired by decades of Marvel comics and films as well as exclusive original themes!
Style your Super Hero with your very own unique costume combinations!

Enjoy real time combat both on the ground and air like a true Super Hero!