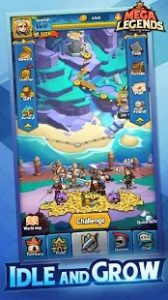 Perfect World Games, the publisher behind Perfect World Mobile has recently released a brand new mobile game called Mega Legends Idle Arena on Google Play Store. It’s an idle gacha RPG where you will get to build and customize the team of a variety of heroes with unqiue skill abilities. As the title of the game says, the battles are idle, your heroes will continue to fight the monsters while you are away.

It’s similar to the AFK Arena game. If you have played this popular idle gacha RPG, published by Lilith games on Android & iOS App Store, then you can imagine what Mega Legends Idle Arena brings to the table. There will be PvE adventure mode where you deploy the team of five best heroes to fight the monsters, grind rewards, and progress further to the next stages. Also, the PvP mode where you will face the team of enemies. You will make the heroes stronger by raising their level, promoting them/awakening them to unleash full potential.

As of now, it has over 60 heroes classified into six different factions. You can summon the heroes with the premium in-game currency – quite hard to get.

So that’s all for now in this Mega Legends Idle Arena game overview.