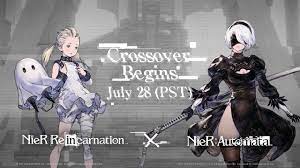 Since A2 has a high basic attack power and is strengthened with abilities, the final attack power is top class for all characters. In addition, the ability to increase the critical rate causes critical hits at a level that can be incorporated into the strategy, so the actual firepower is even higher. It has top-class firepower even in its original state, and it is a powerful one that greatly increases damage when critical. As an attacker, it is definitely a top-performing character.

A2 has low HP and defense at the cost of having top-class firepower. It is strong in short-term battles such as arenas, but it is not very suitable for situations where long-term battles are expected. However, Nier’s current environment is preferential for firepower, and reducing the number of enemies with firepower can reduce damage, so it is not a major weakness.

“2B” can increase agility with its abilities, and its skill has a high gauge increase, so it can be activated faster than other characters. She can reduce the number of enemies before they act,” and has a high original attack power and the attack goes up even with the ability, so the final firepower is ranked high among all characters.

2B skills increase damage when their HP drops below 50%. However, it has the disadvantage that it has low defense and HP status, and even if it can produce maximum firepower, it tends to be incapacitated by enemy attacks.

The character skill of “9S” gives you a buff that “increases the damage done when attacking 2 or more consecutive attacks”. So skills in the order of “skills other than 9S” → “9S character skills” → “9S weapon skills” It is possible to aim for large damage by activating and connecting combos. By continuing to fire continuously, you can permanently receive the effect of increasing damage, so you can compensate for the low firepower of 9S.

9S has low firepower, but is highly durable due to its high HP and defense. However, since there are few stages where low-power characters can play an active role, it can only be used in collaboration quests that increase attack power.

Frenlyse is a high-power attacker who has the third highest attack power among all characters and can further increase the firepower by the spirit of the ability. In addition, because it has a quick foot, it is also excellent that the frequency of normal attacks increases by increasing agility. Frenlyse’s high agility is the most important status in the arena. Since it is important to act faster than the enemies and reduce the number of enemies, Frenlyse possesses character skills that can increase the attack power of all allies. The effect time is as long as 30 seconds.

High agility also means that it is difficult to attack with combos accumulated because the attack order is fast. The firepower of the skill is also lower than that of “A2” and “2B”, so it will not be suitable as the main firepower.

Fio has an agile buff in skill, which is rare among characters. Many fighting type weapons have buffs for all allies and debuffs for enemies, so by combining them, it is possible to operate as a character specializing in assisting allies. It can be said that it is also excellent that the number of combo attacks can be earned by 4 consecutive attacks of the skill.

“Fio” stats are lower compared to other units. Defensive ability “Increase your HP by 11%.” loses value over time.

A 75% chance of granting darkness (3 turns) to a single enemy (enemy attacks in the dark will now be missed). In high difficulty quests that use high firepower attacks and abnormal condition grants, it is often better to avoid being attacked in the dark than to increase durability, so it can be said that it is a powerful character skill. Because of its high agility and ability to move faster than other characters, it can be said that it is an excellent character to raise the firepower of allies by earning the number of combos.

However, overconfidence is prohibited because giving darkness is probable and a weapon has the same skill. “Dimis” has a low attack power, and it is a little difficult to generate firepower by yourself. However, the skill is 4 consecutive shots, and the guns that are good weapons tend to have a large number of continuous shots, so it is very easy to earn combos.

His ability has a limit of 60 seconds to start the battle, but it has a higher magnification than other characters. You will be able to demonstrate high abilities in quests that tend to be short-term decisive battles, such as quests that enter the boss battle from the arena or 1 wave quests.

However, since the firepower of Argo will decrease when the ability disappears after 60 seconds have passed, he becomes weak without other units assisting his firepower.

“Akeha” has a very high durability because its HP / defense can be strengthened with its abilities. It is possible to withstand a certain amount of concentrated attacks in quests where the opponent has a lot of HP and must endure, or quests where the boss attacks frequently with a single attack.

The latest game in the NieR series arrives on mobile devices!

NieR Re[in]carnation is a command-action RPG for mobile devices from Square Enix and Applibot.

– Story / It is a place called The Cage.
A girl awakens on a cold stone floor.
She finds herself in an infinitely vast place filled with buildings that touch the very sky.
Guided by a mysterious creature who calls herself Mama, she begins to explore her new surroundings.
To reclaim what she has lost—and atone for her sins—she sets off on a journey through this place of unknown creation.
…A place known as The Cage.

– Character Info
The Girl of Light
When the girl came to, she was collapsed on the stone floor of The Cage. Though she is kind and has a bright personality, she wears a collar and bandages for reasons unknown, and is plagued each night by horrible dreams.

Mama
A mysterious creature who calls herself Mama. She seems to know something about The Cage, and acts as a guide for the girl.

The Dark Monster
A strange being that wanders The Cage. It resembles a knight in armor, but also a speechless insect. Regardless, it seems to have some kind of goal…
Battles play out by issuing commands to your characters.

– Battle
Battles play out by issuing commands to your characters.
This game includes an auto mode that makes your characters attack enemies all on their own, making it easy for people who aren’t as skilled at video games to join in and play as well.