If you don’t like PvP multiplayer games, then take a look at these offline action games for Android & iOS – featuring hack and slash, intense action gameplay

We have been covering offline action games for a while now and have played so many games brilliant games developed by creative developers. In this post, we have shared a list of offline action games that you can play on Android & iPhone iOS. The list features hack & slash, fighting, sword-action intense games that will keep you busy all the time. So without any further ado, let’s head to the main content. 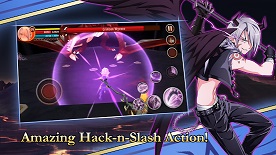 Epic Conquest is a popular action RPG that begins with a fictional story where you get to know how the demons poured into the human realm and going to take over all the areas. Their invasion has begun and you have got the power to stop them. In Epic Conquest, you will be fighting the demons and clearing the waves with the help of warriors with magical skills. The combat gameplay is good; you control the character with a D-pad and unleash their knacks to vanish the demons from the human realms. 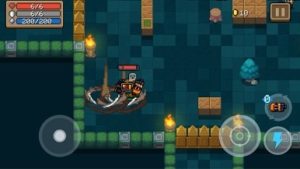 Soul Knight is a popular offline action game for Android & iOS, published by ChillyRoom on Google Play Store and iOS App Store. You can play it solo – there is also a multiplayer mode that allows you to play with friends via local wi-fi. In the game, you help the hero progress through the dungeons guarded by lots of monsters. As you enter the dungeon, these monsters will start attacking your hero. You will have to shoot ’em down and dodge their attacks to survive and progress further. It’s easy to play, there are lots of weapons to unlock and collect. The graphics, gameplay, controls are also good. 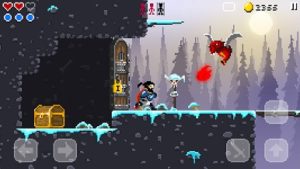 Sword of Xolan is a popular offline action-platformer game where you help the main character in fighting beasts in challenging adventurous levels. The current version of the game features over 30 levels to complete – each level has a unqiue touch. It also supports the controller. The graphics are good. The gameplay is fun. 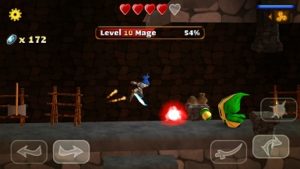 Swordigo is an action-packed mobile game that you can download for free from Google Play Store and iOS App Store. It offers classic action-platform gameplay that sets in the magical lands with rich treasure, deadly monster, secret caves. You can play it solo – it’s easy to play, simple controls, decent graphics, and action-packed gameplay. 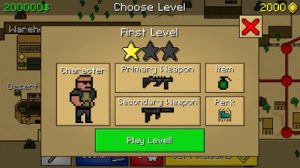 Pixel Force is among the top best action games for Android where you will be playing as a soldier who spawns in the enemy territory. It looks easy – but, it’s not. It’s the most challenging game featuring over 100 unqiue levels with increasing difficulty. There are lots of weapons such as machinegun, rocket launcher, flamethrower, grenades that you can use to smash the enemies down. It’s fun, fast-paced, challenging, and action-packed.

Nonstop Knight is a popular Idle action RPG where you will be playing as a knight who hunts the wraiths and bosses in deadly dungeons. It features an idle system where knight attacks the enemies automatically – you can assist him by using the skills and making him powerful by doing upgrades to his gear set and level. It plays in portrait mode and has decent graphics.

West Gunfighter takes you to the Westworld where you will be playing as a cowboy who explores in an open-world, fight enemies, grind loot, and dominate in the town. You will be fighting the bandits in duel matches, riding the horse, there are missions that you can complete, hidden treasure to discover, lots of places to discover, and much more. Unfortunately, this game is only available on Android. You can play it offline. 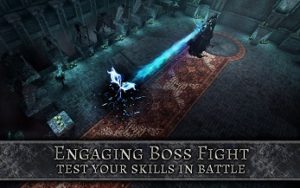 AnimA ARPG is one of the best offline action games that you will find on the mobile app stores. We covered this game a while ago – when it was released. Speaking of gameplay, you will explore the dungeons, fight the zombies, complete the missions. There are three character classes to choose from; each one offers unqiue buffs and skills. If you like Diablo, then we would recommend you to give this game a try. 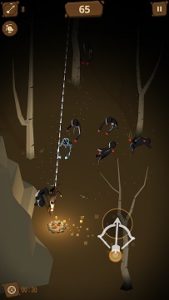 Last Arrows is published by RedSugar on Google Play Store and iOS App Store. It plays in the portrait mode and offers action archery gameplay where you will be unleashing the bows on the enemies in a wide field. You can play this archery-action game offline. As of now, there are two modes; classic mode and survival mode. You can play in casual and hard difficulty – based on how intense action you want in the battles. You will progress through the levels; playing it is quite simple – but it gets challenging over time as you progress to the higher levels. All you do is drag back, aim, and shoot the arrow. It’s so much fun.