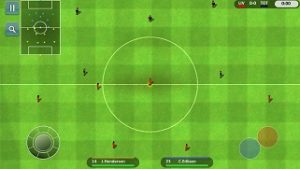 Super Soccer Champs is the best offline Soccer/Football game on Android & iOS. The game offers Soccer/Football management as well as full match experience where you will be controlling the players on the field with joystick control and do the pass, kick the shots, and score the goals. This game also supports local multiplayer; if you have the controller, you will be able to play it. You get to adjust the tactics, manage the squad, train the players, trade the players, and there is a lot of content in the game that you would love for sure.

Stickman Soccer is one of the best offline Soccer/Football games available on mobile platforms. It offers simple controls where you use the joystick to control the players on the field; when leading the ball, you can pass it to the allies or shoot for the goal. While the ball is in the possession of the opponent team’s player, you will get to tackle/slide to snatch the ball away and get back in the possession. You can play it in three difficulty settings; easy, medium, and hard. Also, you get to choose the timings of the match. Although, it does not offer team management mechanics.

New Star Soccer is a popular mobile game available on Google Play Store and iOS App Store. It plays in portrait mode and offers a top-down perspective view. You will start by choosing the team/country and learn the basics in the tutorial. It’s pretty basic – you drag the ball, aim towards the direction where you want to kick, and then tap the ball to complete the action. Keep in mind that it does not offer the true Soccer/Football game experience; the match progresses in the background and you get the details in logs. During certain events, you will get to pass or shoot the ball. Before that, you can only change the strategy; offense or defense, and the work rate. Other than the main gameplay, you will take care of the stats, contracts, and the sponsors. 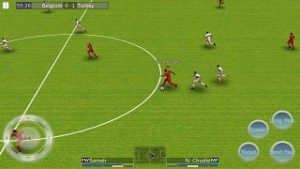 World Soccer/Football League is another offline Football/Soccer game on Android & iOS. It plays in the landscape mode and offers three main game modes; exhibition, cup, and league. Each mode gives you a variety of sub-modes; for example – In the exhibition mode, you have the option to choose friendly or penalty. In the league matches, you can choose a variety of leagues. After choosing the mode, you can set the difficulty, change the weather, set the match time, and do more configurations based on the gameplay you want.

Speaking of gameplay, you will use the bottom-left corner joystick for navigation and bottom-right buttons for passing, tackling, dribble, etc. The graphics are nice, controls are OK; you will need to practice a lot to get used to them.

It’s a mission-based game where you proceed through the challenging levels. In each level, you will get different tasks to complete. You will have a certain number of shots to play; within those, you must complete the mission. Initial levels are pretty easy to play and complete – but, things get challenging later in the game. The gameplay is pretty simple; you flick to kick the ball and make goals. It’s simple and quick.

So that’s all for now in this post on best offline Football/Soccer games on Android & iPhone iOS. Share your recommendations in the comments.