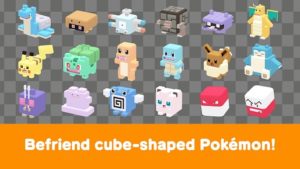 The only problem in these offline Pokemon games or any other offline game is that one would not be able to save progress to the cloud. That means if you switch the phones, you will have to start the game from the beginning – it would not load the progress from the older phone. Also, In one or more of the below-listed offline Pokemon games, you might need an internet connection to open it for the first time. If you are OK with these things, then you will find this list pretty interesting. And, if you know more games, you can comment below and share them with us – we would love to add them to this list. So let’s not waste any time and head to the main content. (Published by GamingSoul.Org) – the offline Pokemon Games on mobile.

Following is the list of top best offline Pokemon games(including clones) for Android & iOS – by GamingSoul.Org –

Pokemon Cafe Mix is one of the best offline Pokemon games available on Android, iOS, and Nintendo. We have not played it on Nintendo yet – but it sure works offline on Android and iOS. Speaking of Pokemon Cafe Mix gameplay, you will be managing the cafe where Pokemon are the characters that visit you and make orders. You will complete the orders by solving the puzzles; link the Pokemon icon, make combos, and complete the goals. The progression is based on the orders – each order gives you a different goal to complete. You can read the Pokemon Cafe Mix tips here.

Its size on Android is 217 MB. On iOS, its size is around 300 MB. Is it offline? Yes. But, for the first time, you will need an internet connection; to register as a new player; agree to the terms and conditions, go through the prologue -> enter the name -> choose first Pokemon, for instance; Pikachu. Complete the tutorial -> you will get PM tickets at the end of the tutorial that you can use to make purchases in the shop. Once that is done, you can play the Expedition mode offline without any cellular data or Wi-Fi. Keep in mind that some functions would not be available while in offline mode; for instance, shop purchases(of course, you would need the internet to make purchases). Other than that, everything should work fine. Just download the game and complete the tutorial. After that, enjoy the offline gameplay.

It’s one of the best offline Pokemon games for Android & iPhone iOS – featuring almost all the Pokemon.

On Android, its size is around 100 MB. And, on iOS, its size is around 130 MB. Is it offline? Yes. But, like Pokemon Quest, In Pokemon Magikarp, you will need an internet connection when you open it for the first time. Otherwise, it would show you connectivity errors. Select the language and agree to the T&C. After that, start the game -> follow the prologue. That’s it. After that, you would be able to play Pokemon Magikarp Jump league adventure mode offline without any sort of data connection.

Speaking of gameplay, you will be playing as Magikarp trainer; train and help Magikarp grow stronger and then compete in league matches for the highest jump milestone.

So these are the two best offline Pokemon games for Android/iPhone iOS. If you don’t mind playing good clone games – similar Pokemon apps – but with different characters; offline gameplay, training, exploring, catching, etc., then take a look at these games that you can play without any sort of data connection –

Coromon is a new mobile game that plays without an internet connection and matches all sorts of Pokemon gameplay conditions. It features pixel art graphics. At the start of the game, your mom wakes you up, you get the parcel, which contains Digi device; lux phone – gives you info on Coromon. Then you will head to the Lux Town where the lab scientist gives you the first Coromon. You will be playing as a Coromon trainer who explores the map, find and discover Coromon monsters and become the best one in the world. The demo version is now available in beta on Google Play Store and iOS App Store.

EvoCreo is another Pokemon lookalike game that you can play offline on mobile. It lets you save progress locally. Speaking of gameplay, In EvoCreo, you will explore, find, discover, and collect the monsters. You can battle, train, evolve, catch, and complete the collection of lovely creatures/monsters. Although it’s a paid game – you can get the demo version(Lite) for free from Google Play Store and iOS App Store. If you think it’s worth playing, pay for the Pro version and enjoy an offline gaming experience.

Well, the free version is online and has a lot of ads. For premium, you will have to spend bucks and then you can enjoy Drakomon offline. We would recommend you to play the free version first – try it – if you think it’s worth playing, go for the premium version and enjoy offline gameplay. It has cute good graphics and there are so many things to do; exploring, battle, catching monsters, etc. If you play online, you will be able to participate in the PvP mode.

Nexomon is another Pokemon lookalike game that you might love. It’s getting updates for years now and featured in the top 20 RPGs on USA iOS App Store. You can get the Android version for free – the demo one. For the full version, you will have to pay $0.99. Speaking of gameplay, you will embark on a beautifully crafted map where you can discover a ton of monsters; battle them, catch them and complete the collection! The graphics are also good.

So this would be all in this post on best offline Pokemon games for Android/iPhone iOS 2020. If you know more games, comment below. We would love to add them to this list if they are good.