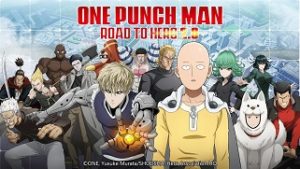 You might have heard that the original version of this game was not getting any sort of updates for a long time as the developers were working on the 2.0 release. Well, the wait is over and we have got the One Punch Man Road To Hero 2.0 version on Google Play Store and iOS App Store. If you loved the anime and the original version of this game series, then you must give the sequel a try.

The 2.0 release is based on the Idle RPG system where the heroes that you put in the formation fight the enemies automatically. You will start with the main story mode, which is pretty great. It gives you the best cutscenes from the anime series that you would love to watch again. If you have not watched the anime series, these storylines or cutscenes between the chapters will give you the idea of how great the anime series is. The story mode has around x20 chapters to complete. In each chapter, you will be challenged to defeat powerful enemies.

One Punch Man Road To Hero 2.0 is free to download from Google Play Store and iOS App Store. You can play it for free as long as you want. Although, players can spend the money into the game and get precious currencies or perks which are hard or impossible to get as a f2p player. For example – this game has a VIP system; if you buy the VIP, it increases the character limit, the number of chances you get to play the specific game modes, more rewards such as cash/EXP from patrol/idle, etc.

As a f2p player, it would be hard to collect all the characters available in the game as you need diamonds to recruit the characters. The diamonds are hard to earn – also, the drop rate of elite grade characters is quite low. If one is willing to spend the real money, he/she can buy diamonds and recruit more and more characters. In our opinion, this game does give an edge to the players who spend money – in terms of progression(character collection) and rewards(through VIP). If you spend, you can progress faster.

Is it F2P friendly? Well, you do get enough diamonds now and then by playing the game, which would be enough to recruit the characters to fill up the squad for the PvE campaign or the tournament like modes. Speaking of the high-grade characters drop rate, the elite characters drop rate is 4.6% as per the current version of the game. With the number of diamonds that the game gives you through all the free methods like quests, events, it might take longer for you to collect all the elite-grade characters. You can always retire the low-grade characters and get the invested resources back to invest again on the high-grade heroes if you get them later in the game.

Well, the gameplay is similar to other Idle Gacha games like AFK Arena. Your heroes in the squad fight the enemies automatically. The strategic part is making the right choice of characters while building them and assigning them on the slots where they can perform better. Mixing up the character combination based on their skills and strengths; like healer, tank, AOE, back-row attackers, front-row attackers, etc. is part of the strategy. Other than that, you don’t do much in the battles except using the skills, which could also be set to auto-mode.

In other words, there is no hack ‘n slash action gameplay. You will choose the characters, assign them on the front/mid/rear rows, and let them fight the enemies automatically. As you proceed further to the next stages in the chapter mode, you will surely get stuck. This is the part where you will have to research deep and consider the bonuses like type-advantage, faction bonuses, etc. Also, powering up the squad by doing all sorts of upgrades; leveling, armed them with top-notch gears, upgrading those gears, and much more.

One Punch Man Road To Hero 2.0 features a bunch of game modes that you will love to participate; PvE tournament arena to compete with others, the extreme trial mode where you challenges enemies floor-by-floor, the road to be strong – it resets every day and gives you S Tokens that you can spend in the mall for characters’ shards. And, there are many modes that you will unlock as you proceed through the story mode.

One Punch Man Road To Hero 2.0 does not feature any kind of Ads. It has IAPs; players can top-up for diamonds or VIP with real money to make progression easy or support the developers.

So that’s all for now in this One Punch Man Road To Hero 2.0 review. What do you think about this game? Share your reviews in the comments below. If you are new to the game, take a look at the beginner’s guide and the codes.