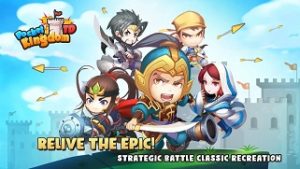 We have been playing this game for a while now. It’s based on the popular game genre; tower-defense where the player uses the heroes to build the defense to save the hero from the enemies. The developers of the game have added a lot of things to the game, which makes it pretty unique from other tower defense games. For example; the harem function, PvP arena, gacha, upgrades, etc. Is it any fun? Let’s find out in this Pocket Kingdom TD review!

Pocket Kingdom TD is a freemium game; you can play it for free, but there are IAPs that you can avail to progress fast. For example – you need the energy to play the PvE. Once you are out of energy, you can spend the Sycee and recover it back to full to start playing again. Sycee is the most valuable currency in the game that players can buy with real money and spend on hero gacha, stamina, items in the store, etc. As a f2p player, you will be relying on the daily bonuses, events to get Sycee for free. You can get around 400 Sycee by finishing the daily bonuses. But those daily bonus quests consist of the tasks that require expensive items such as premium order scrolls, purchasing items, etc.

From our perspective, it’s not a f2p friendly game. It has pay-to-play elements. You can get better heroes if you have the premium currency in a good number. Of course, you can play it for free, but the progression would be slow as compared to the players spending real money.

It has mainly two game modes; the PvE campaign where you beat the stages in chapters and progress further to a higher difficulty. If you are familiar with the TD games, you would not have any sort of problem with the PvE battles. If not, then it’s simple to understand; you build the line up of heroes and deploy them on the combat field; on specific slots. If the enemies are in the range, your heroes will start attacking them. The goal would be defending the main hero.

PvP battles are not like the PvE battles; in this mode, heroes fight the enemy heroes’ team; usually, the high powerful team wins the match. There is no TD mechanics in the PvP.

One thing that must know is there is an energy system in the game. You would not be able to play the game if you run out of the energy/stamina. So that sucks!

It has no ads. But there are IAPs and VIP packs. You can buy the Sycee, get VIP with real money for more perks. VIP perks let you buy stamina more number of times, purge in x5 at a time, more bets on the slotting machine, etc.

So that’s all for now in this Pocket Kingdom TD review. What do you think about this game? Share your reviews in the comments. Also, if you are new to the game, you might want to check the guide and codes.