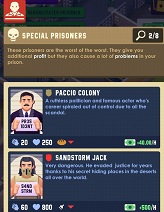 Special Prisoners in Prison Empire Tycoon are sent by the state to prison randomly. Some of them can be discovered in the events. Unlike the normal prisoners in Prison Empire Tycoon, special prisoners give you more money, But, they can increase the chances of starting a riot in the prison. Each special prisoner in the game has special debuff stats that are applied when they enter the prison.

There would be a red color skull icons on their heads.

Based on the negative effect, you will have to make improvements. For example – food/hunger level – improve kitchen(stove, fryer), hire chefs/cooks, upgrade dining hall, etc.

If you don’t know about the symbols, then we would recommend you to get familiar with them right now. Read this guide –