Raid Kingdom! is a brand new mobile game published by Gram Games Limited. It was released on January 8, 2020, on Google Play Store 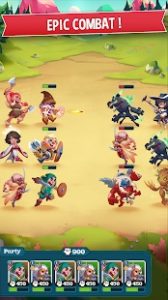 Gram Games Limited, the publisher of Merge Dragons!, Merge Magic!, Merge Farm! games has just released a brand new mobile game called the Raid Kingdom! on Google Play Store. It features cute little heroes that you deploy on the battlefield – in a tactical way – to splash the enemy in defeat. In this post, we will give you an overview of the Raid Kingdom! game. So without further ado, let’s dive in!

The game takes you to the Kingdom adventures where you raid enemy kingdoms and conquer their lands and loot the treasure; chests, gold coins, and exp. There are a dozen heroes available that you use to fight enemies in the battles. You will progress level by level – at each level, you encounter enemy barracks that you will need to burst to progress further.

If you get defeat, the game sends you back to the first level and you will have to start over. You can start strong by upgrading the heroes; clear as many levels as you can and loot the treasure – the best thing is that each level gives you some reward that you can use to get stronger.

After clearing a level, you get to choose a relic that gives you a buff for further stages. For example – increase in HP, DEF, ATK, etc. You will be given multiple relics – but it allows you to select only one. So that’s one tactical part of the game. Another thing is to deploy the heroes; if you have been playing RPGs for a while now, you would know that heroes in these games belong to different classes and have different abilities.

In the Raid Kingdom!, you need to select and deploy the heroes wisely because some are good at inflicting damage, while some are good at absorbing damage in the front line. There are ranged attackers, melee attackers, defenders – so make sure to check out their profile and read their stats.

Can You Play Raid Kingdom! Offline?

Yes, you can! But you would not be able to claim the free rewards that the game gives upon watching a short video ad – that requires a stable internet connection.