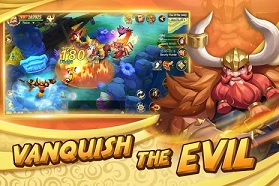 Sinbad: Great Adventures is a brand new MMORPG. It’s just like other MMORPGs – but with a different theme, based on Sinbad: Legend of the Seven Seas. At the start of the game, you get to choose one of the five features classes; Ghazi, Hashshashin, Windtalker, Elementalist, and Voyager. Well, this is a set of Tank, Assassin, Ranger, Mage, and Destroyer classes. It does not give worthy details on the classes at the start of the game – so that’s a problem a newbie is likely to face.

We would recommend you to choose Ranger(Windtalker) if you want to be a ranged DPS. After choosing the class in Sinbad: Great Adventures, you will name your character and start the journey.

At the start of the game, everything is locked – skills, pet function, game modes, profile, etc. You will have to complete the specific quests to unlock them.

It offers auto-quest mode – you tap the quest and the game makes the character follow it automatically. Also, it has an auto-battle mode – by activating it, you would not need to tap the skill buttons. So that’s like watching gameplay. You can turn it off if you want and play manually.

So this would be all in this post on Sinbad: Great Adventures.