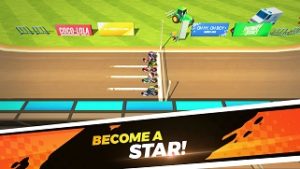 Simplicity Games, well-known for Football Killer, Volleyball Challenge, and many other mobile games, recently expanded the portfolio of their game apps with a brand new release called Speedways Heroes. It’s a simple yet challenging bike game that you can play offline and compete with AI in career game mode. It is said that the multiplayer and tournament game modes are coming in later updates. As of now, the current version of the game features career mode.

The gameplay is pretty basic where you press the pedal button and stop the needle at the right time for a head start. Then you will be using the arrow keys to control the bike; drift the bike to make turns, complete the laps, beat the rivals, and win currency that you can use in making upgrades such as skills, bike, etc. The two in-game items are gold coins and diamonds. You can buy the chests with the gold coins to get the cards, character skins, etc.

You will progress by the levels; each country career features a lot of challenging stages to complete. As said above, it’s simple and challenging. It’s challenging because it’s hard to drift while maintaining the speed of the bike and avoid crossing the off-road.

Speaking of monetization, it has ads, IAPs. Ads pop-out now and then automatically. IAPs include gold coins, diamonds, and VIP purchase. You can play for free for sure.

So this would be all in this post on Speedways Heroes game overview. What do you think about the game? Share your view in the comments below. Also, if you have got tips, tricks, share them too!