Stone Era is a brand new Idle MMORPG for Android. It is published by gameer on Google Play Store and was officially released on January 14, 2020 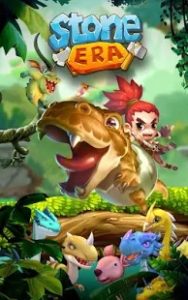 Stone Era game takes you to the stone age where you will be playing as a human and hunt the dinos and other creatures. At the start of the Stone Era game, you get to choose a race; beast, apes, and leopard are the three races. Each race has a different look – nothing more mentioned on the races at the start of the game. So it’s not clear whether they have different abilities or not.

In the beginning, you will just tap-tap-tap to complete the tutorial that teaches you how to complete the main tasks, upgrade the pets, mount animals, upgrade the skills, etc. The gameplay is pretty simple – your character battles the creatures and boss automatically. On the bottom-right side, tap the boss dino button to challenge the boss.

As said above, you will need to clear a set number of waves to challenge the boss. These battle victories give EXP, equipment, in-game currency that you can use to make the character stronger.

In the main city menu, you can get access to other functions of the game – affinity, arena, clan, mentorship, totem, boss, instance, shops, etc.

Our first impressions – this game is not for everyone – those who love to play Idle games should give it a try. The download size of the game was pretty low – as it downloads the rest of the content later in the game. The tutorial is bad and very fast for a newbie. The graphics are good. UI is OK – although, there are some annoying things like reward packets dropping from the top, loading, etc. Is it pay-to-win? Yes.

So this would be all in this post on Stone Era game.