Towerlands is a popular mobile game available on Android & iOS platforms. It tasks you to build the best tower so that you can defend the powerful waves of enemies 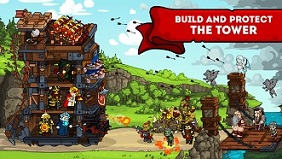 We have been playing Towerlands for a while now. It features PvE, Clan Battles, and Boss Battles. The gameplay is fun, challenging, and addicting. You will start playing from the PvE mode where you progress stage-by-stage and fight the waves of enemies for gold and experience.

For a f2p player, it would be very grindy and slow. By spending real money, you can speed-up the progress. There are two main currencies in the game; gold and crystals. Gold is the basic one – you can earn it by defeating the enemies in the PvE battles, from the castles on the map, and gold mine. The main use of gold coins is upgrading; tower upgrades, unit upgrades, module upgrades, building upgrades, etc. You can buy crystals with real money and convert them for gold coins.

In Towerlands, you will be building the tower where you can deploy the units; characters to attack the enemies. Other than that, you can add modules for more firepower. What’s the strategy? The strategic part is choosing the right combination of units for the waves that you are going to face. There are a ton of units in the game – each one has special abilities. The tower has limited slots; you will have to build it wisely. There are several units with crowd control abilities like stun, continuous damage. Several units summon other creatures to deal with enemies. While some of the units help you grab more loot from the enemies.

Map – Here you will find the bosses, castle, Island. Bosses are powerful – hard to beat. You can conquer castles by defeating the army. From Island, you will be gathering the resources to craft items for the statue in the city.

Clan Battles – if you join a clan, you will get to play the clan battles. In clan battles, you will defeat the waves and earn keys. All members of the clan can participate in the battles and earn keys. The more keys they collect, the better chest they get. These chests feature crystals, gold, resources, autoplay badges, etc. You would not be fighting other clans – it’s like another PvE mode.

Final Words – the gameplay is good, fun, challenging. It’s similar to the Grow Castle game – but Towerlands has better graphics.

The graphics are good; the art style, each unit playing skills in different styles/animations, the battle part where tower/units and enemies clash on the battlefield.

As said above, for a f2p player, the progression would be slow and grindy as compared to other players who spend money. Speaking of Monetization, Towerlands has ads, IAPs. You can watch video ads for auto-battle gameplay, bonus rewards. IAPs include; subscription service(monthly) where you get bonuses without watching the video ad, unlimited autoplay, badges, and high-battle speed. Other than that, you can buy crystals and unique units. These unique units are premium; you would not get them for free by playing. These are Pharaoh, Dragonlord, Light Archer, Storm, Elementalist. We have seen players in the top clans using Light Archer – seems to be the best.

So that’s all for now in this Towerlands game review. Share your opinion in the comment section below.

If you are new to the game, take a look at this guide on the best units and best build.