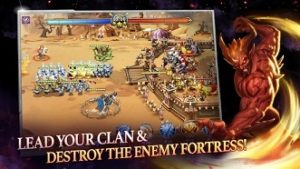 Might & Magic Heroes: Era of Chaos, The game that generated over $120M in China, is now heading to the global release soon. Ubisoft has recently soft-launched it on the iOS App Store and Android Google Play Store. Speaking of the game, it’s an RPG where you will build the army of heroes – deploy them on the battlefield in a strategic way so that you can take on the enemy’s army easily.

Once you are done with the battle-line set-up; changing the position of heroes, you can fight the enemy’s army. The battle system is pretty easy to understand as there is no complex thing. On top of that, the game has got a decent tutorial that guides you throughout the game. In the beginning, you play the adventure mode where you explore the massive world map; full of enemies, treasure, artifacts, glory!

It features PvE, PvP, and guild battles. In the PvE, you will be fighting the demons on the world map. In the PvP, you will fight other players’ army in the tensed battles. While the guild function lets you team-up with other fellow players or friends and help each other.

There are lots of heroes to collect, game modes to play, challenges to complete – the game features a huge content for the players and they can enjoy it the whole day.

You can upgrade the army and make it stronger to beat the enemy’s army; 40+ troops and creatures such as griffins, archangels, dragons, golems, etc. are featured in the game.