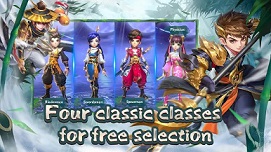 In this post, I have shared an overview of a brand new MMORPG called Crasher: Origin, which is published by the 4399en game on Google Play Store and App Store. As of now, the game has got 5K downloads with 4.5 ratings on Google Play Store. It is an MMORPG with the vertical layout – so you can play it with one hand. In the game, you will be playing as Bladesman or Swordsman or Spearman or Wizard. There are four classes – each class with unqiue weapon, skills, gameplay, look.

At the beginning of the game, you will have to choose one out of the four classes; it allows you to create three different profiles – so you will be able to try out three character classes manually. After that, you can customize the character – and, then you will have to choose a name. To save the progress, you can bind it with the developer’s email system or FB or Google Play Games.

Let’s talk about the gameplay.

Well, to be honest, it didn’t impress me at all – because, it’s similar to all other MMORPGs out there – at least when you set it on auto-mode, which is on by default. If you have played MMORPGs on mobile, then you can guess what it puts on the table. You will be completing the quest – interact with the NPCs, they give you quest like collecting or grinding materials from the map, and then you will give to them for rewards such as gear, EXP, the basic in-game currency. That’s auto. You just tap the quest and watch the character do stuff. So nothing new – it gets boring if you keep playing with auto-mode on.

Without auto-mode, the controls are like – tap the area where you want to move the character, tap the skill to cast – it’s kinda slow.

All other functions such as daily missions, guild, mount, dungeon modes, etc. are available. There are plenty of things to do once you reach higher levels. So content-wise, it’s great.

Yong Heroes – Is It Pay To Win?

Indeed. There is a VIP system, you can top-up for better gears, buy premium in-game currency and use it in the store for valuable items. So a p2w player can get more benefits by spending real money. If you are a f2p player, you can play for free – these purchases are optional – the game does not force you to buy stuff. Also, you can rely on events, daily missions like stuff for valuable items and build a strong/powerful character.

Is It Worth Playing?

Well, it depends on your taste. Do you like playing games with a vertical layout? Do you like MMORPGs with auto-battle, auto-quest mode? If yes, then try. For those who hate auto-quest, auto-battlers, then don’t. I found it boring.

You can download the Yong Heroes game from Google Play Store.