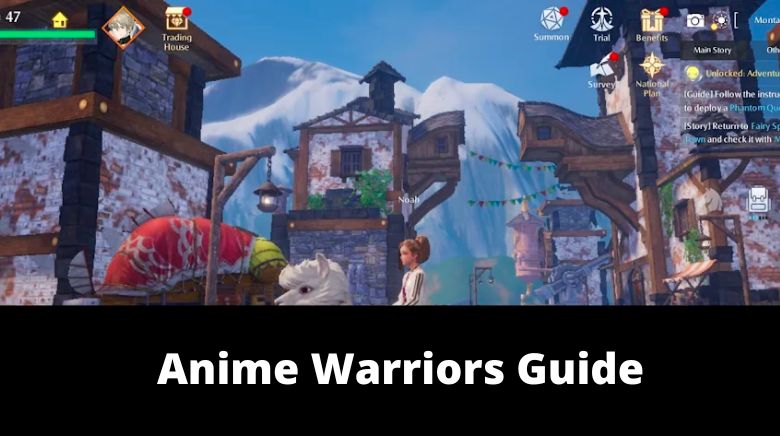 You will start the game by summoning characters, available in a wide range – from 6-star to fodders. 6-star anime characters are hard to obtain, but they are mighty. Anime Warriors feature three in-game modes[in the beginning]; the first one is adventure mode, which is also known as story mode. In this mode, you will take on the mobs of enemies, complete the quests, and earn rewards.

There are two PvP modes; casual and ranked. The casual mode is friendly, and you would not earn any rank points. The battle in PvP lasts a few minutes. If you get eliminated, you can respawn[casual].

Controls; Use the W/A/S/D keys for navigating. Press a navigation key + shift to dash. For instance; W + Shift. Press the skill button at the bottom of the screen to unleash the skill. After the battle, you will be rewarded with the currencies; the amount will be based on your performance. Press the lobby button in the lower-left corner to head to the lobby.

Yen and Gems are the two main currencies in the game. You can earn these currencies by playing the game, completing the quests, through codes, and other in-game activities like logging in, events, etc.

Press the quest button in the lower-left corner, and you will find the main quests that grant crystals or gems and the daily quests that give Yen. You will need crystals to summon the characters. Press the summon button in the lower-left corner to open the gacha menu. The banner refreshes daily, so save the crystals for your favorite character. Once it appears on the banner, spend your crystals.

Head to the inventory by pressing the inventory button in the lower-left corner. There you will see the list of characters that you obtained so far. Select any character and then increase power by feeding other low-level characters or through evolution, which requires specific characters. You will need Yen to develop the characters.